See also our other pages on topic:

The menopause and brain function have often been viewed as connected in various ways. And it now seems that some of what are considered some of 'the worst'of the typical menopause symptoms may, indeed, actually originate in the brain.

A scientific study has challenged the old concept that menopause begins in the ovaries and therefrom inspires the world of woes that menopause can become for some women.

Some of the most unpleasant symptoms of menopause, such as hot flashes and night sweats, have long been believed to originate in the ovaries.

But new research challenges that assumption, and instead suggests that menopausal symptoms, at least in part, may begin in the brain.

That's because the hypothalamus and the pituitary gland stop reacting normally to estrogen in some women, suggesting they may have developed a reduced sensitivity to estrogen, researchers at the New Jersey Medical School report in the Dec. 22/29 issue of the Journal of the American Medical Association.

"This is an important new concept: Menopause doesn't just originate in the ovary, but also in the brain," said Laura Goldsmith, a professor of obstetrics and gynecology and women's health at the New Jersey Medical School of the University of Medicine and Dentistry of New Jersey.

These findings may lead the way to further research that will ultimately help doctors predict the type of menopausal transition a woman might have, and help to design non-estrogen medications that could help reduce symptoms that women experience as they enter this phase of life, said Dr. Gerson Weiss, chairman of obstetrics and gynecology and women's health at the New Jersey Medical School.

Menopause refers to the time when menstruation stops. A woman is not considered menopausal until she has not had a period for 12 consecutive months, according to the North American Menopausal Society. The time before menopause, which is often rife with symptoms due to hormonal fluctuations, is called perimenopause. During perimenopause, common symptoms include hot flashes, trouble sleeping, vaginal dryness, mood swings and irregular periods.

This study stemmed from research done for the Study of Women's Health Across the Nation (SWAN), which was funded by the National Institutes of Health, that examined women's' health as they approached menopause.

The SWAN study included more than 3,300 women between the ages of 42 and 52 at the start of the study. A subset group of 840 women provided daily urine samples, which were tested for hormone levels. The samples were collected daily for one full menstrual cycle or 50 days, whichever came first.

From that group, the researchers learned that 160 did not ovulate. After further analyzing the hormone levels from the non-ovulating women, the researchers discovered that these women fell into three distinct groups.

The first group had an increase in their levels of estrogen, and then had an appropriate surge of luteinizing hormone (LH) that should have triggered ovulation, but didn't. According to Weiss, this lack of response indicated a problem originating in the ovary.

In the second group, estrogen levels peaked, but there was no correlating surge in LH, which Weiss said should be triggered by the hypothalamus and pituitary gland responding to higher estrogen levels.

The third group had similar estrogen levels early in their cycles, but didn't have an increase in estrogen later as the first and second groups did. LH levels didn't surge, but were higher for most of the cycle than they were in the other groups.

According to Weiss, this is "clear evidence that the brain is not responding to hormones," suggesting the second and third groups showed different kinds of decreased sensitivity to estrogen in the brain.

The women in the third group were also the ones most likely to report symptoms, such as hot flashes and night sweats.

Goldsmith said the researchers hope to continue studying these women. She said they'd especially like to learn how the timing of menopause correlates with their findings. For example, the researchers would like to see if the women in the third group were, perhaps, further along in the menopausal process.

"It appears that what's going on in menopause isn't only ovarian," said Dr. Steven Goldstein, a professor of obstetrics and gynecology at New York University School of Medicine. "We thought the pituitary responded to lower levels of estrogen, but there may be a lack of sensitivity to estrogen in the hypothalamus and pituitary."

What's important for women to know, said Goldsmith, is that there are "real biochemical changes occurring during menopause." Researchers are beginning to understand how those changes start to occur, which is the first step in trying to come up with more effective treatments.

Take a look at these useful resources relating to natural remedies for helping you cope with the menopausal symptoms:

You can also get the new Meditation for Wellbeing eBook free when you buy Natural Strategies for Coping with Menopause -- more details (click image): 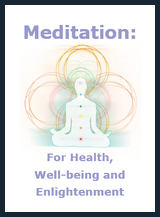 Also see our additional insomnia cure and sleep problems articles, which can be useful to sufferers of typical menopause symtoms.

All articles on this website are copyright © (2006-2020) and may not be reproduced in any form without prior express written permission. In compliance with current regulations we would like to make the following statements:

The content of this website is provided for general informational purposes only, information appearing on this website should in no way be construed as diagnostic and is NOT meant to replace the advice of a qualified medical practitioner. Whilst information is researched and drawn from reputable sources, no guarantee can be made by www.GoNandO.com for its provenance or accuracy. Should you have any health or medical concerns whatsoever you are advised always to consult your family doctor at your soonest opportunity. The authors/owners of www.GoNandO.com cannot be held responsible in any way whatsoever for any use made of the information provided on this website.

Please note that articles and reviews may relate in some cases to products or services for which the publishers of www.GoNandO may receive a remuneration by way of an affiliate fee, or other reward or payment, should a purchase be made after using a link from the site. This is Important: Using our links will NOT affect your statutory rights NOR will it inflate or otherwise adversely affect the price you pay -- but we would like readers to be aware that this process is what allows us to fund, maintain and develop the website for the benefit of all. Currently, such income fall below requirements and we are funding the site out of own resources, if you have found the information in any way useful we are always very appreciative of a small donation made via PayPal to the creator and publisher at the address algsmith@algsmith.com We thank you in advance for using our links to examine any recommended products more closely, and particularly thank you should you decide to make a purchase from which we may derive a small benefit, or make a direct donation as outlined above.

: If you have any questions, comments or suggestions please use our 'contact us' page. Or you may write to the website editor and administrator, Al G Smith at: GoNandO Online Publishers Quinta de Cima (Officina de Correios) Vale de Prazeres, 6230-788 Fundao Portugal Or call Al on: ++351 926 787 406